Augmentative and Alternative Communication (AAC) can be a permanent addition to a person’s communication repertoire or it may function as a temporary aid. The Therapist Neurodiversity Collective actively advocates improving the quality of life for the millions of people around the world who use AAC for communication purposes.

The Therapist Neurodiversity Collective advocates for all people to have the support they need to access AAC. We advocate for communication choice that is free from coercion and/or compliance. We are advocates for removing both access and opportunity barriers to communication. Robust AAC is our first and primary choice for aided communication. 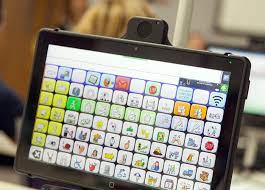 The ultimate goal of AAC is communication autonomy and the ability to connect with others. AAC systems have to be robust to support those goals.

Here are some features to look for:

This understanding of robust language has been shaped by the work of Gayle Porter, Linda Burkhart, Kate Ahern, and Carole Zangari.
Resources:
Praactical AAC: Linguistically-robust AAC Systems
Kate Ahern: What is a robust vocabulary in AAC?

PECS® uses Operant Conditioning (ABA), which is a behavior technique that can be used to target and increase a behavior by pairing the performance of the target behavior with a positive or rewarding outcome. Per Andy Bondy, inventor of PECS, “Skinner’s analysis of Verbal Behavior forms the basis for teaching particular skills at specific points in the training sequence and also provides guidelines for how best to design the teaching strategies.” PECS uses picture-based prompting and reinforcement tied to error correction in order to teach language skills. The method allows the trainer to artificially cause frustration through the withholding of highly desired objects or food until the targeted behavior is achieved, even if the communicator becomes upset or angry. It is not a natural or nice way to teach language.

PECS® takes away self-determination, it violates the body autonomy of the human on the receiving end, it is disrespectful and dehumanizing. PECS® trains human beings using operant conditioning, the same way one would train dogs, pigeons, or rats. Non-speaking human beings are not animals.

Therapist Neurodiversity Collective does not recommend PECS® as an AAC system. We have strong ethical concerns and philosophical differences pertaining to the use of Applied Behavioral Analysis (ABA) on human beings, including ABA-derived therapy models. We do not force compliance through the earning of snacks, checkmarks, behavior charts, stickers, access to favorite toys, activities, or similar. The fundamental goal of ABA is compliance with the will of the person in the position of authority; this is completely counter-intuitive to self-advocacy, self-determination, and upholding human rights and dignity. Therapist Neurodiversity Collective advocates for communication choice that is free from coercion and/or compliance. We are advocates for removing both access and opportunity barriers to communication. Robust AAC, including access to core language, is our first and primary choice for aided communication.

Read more about why Therapist Neurodiversity Collective does not use PECS®

The Problem with PECS®
Why We Model Language and Honor All Communication, instead of Using PECS®

A technical report was created by the National Joint Committee for the Communication Needs of Persons With Severe Disabilities and approved by the Executive Board of the American Speech-Language-Hearing Association in spring 2002 states, “One common argument against a particular type of communication service for toddlers and preschool-age children is that such children are “too young” to introduce the use of an augmentative/alternative communication (AAC) mode. Specifically, some parents and professionals believe that the introduction of an AAC mode at an early age will preclude the child from ever developing speech as his/her primary mode of communication. In fact, however, numerous studies have demonstrated that the use of AAC does not interfere with speech development (Romski, Sevcik, & Hyatt, in press) and actually has been shown to support such development (see Millar, Light, & Schlosser, 1999 for a review of research demonstrating this effect; Romski & Sevcik, 1996; Romski, Sevcik, & Pate, 1988). Nor do communication needs disappear when school services end; they remain or expand as children transition into adulthood and as young adults grow older. Communication permeates every aspect and cycle of life, influencing one’s self-determination and life quality. Likewise, a number of studies have shown that individuals with severe disabilities continue to develop communication and language skills well into their adult years (McLean, Brady, & McLean, 1996); and that adolescents and adults with a variety of severe disabilities make measurable gains when provided with appropriate communication services (Iacono, Carter, & Hook, 1998; McLean & McLean, 1993; Romski, Sevcik, & Pate, 1988; Sack, McLean, McLean, & Spradlin, 1992). Communication is essential across the lifespan, thus it is inappropriate to restrict access to communication services and supports on the basis of chronological age.”

Presuming competence is the least dangerous assumption we make as clinicians. We believe that communication is a human right and that all humans are born able to communicate. When we work with families to help their loved ones communicate, we are helping with connections across all areas of their lives. Communication and language are complex cognitive processes, but we often forget that all forms of communication require some form of motor planning as well. When we implement AAC with our clients we take a language development framework and the device is simply the tool. The ultimate goal of intervention for individuals with complex communication needs is to support the development of communicative competence so that these individuals have access to the power of communication – to interact with others, to have an influence on their environment, and to participate fully in society (Beukelman & Mirenda, 2013). Oftentimes, we see when clinicians don’t presume competence this sets up a scenario where children/clients have to prove ability or mastery of a set or “prerequisite skills” in order to “qualify” for access to robust language systems and literacy instruction. We believe that communication is a human right and that all people have the right to have access to all functions of communication including literacy skills.

Presuming Competence: The only Prerequisite to AAC

The Communication Bill of Rights

The Literacy Bill of Rights

For the AAC Novice:

How Can I be an AAC Supporter?

Finding AAC for Those Who Need It

Practical Perspectives on Part-time AAC Use

When Speech is Unreliable – Part-time AAC Use

Autistic Adults Who Use AAC Part-time

“Access” means having the freedom or ability to have unrestricted use of something. For someone who is dependent on AAC for communication, having continuous AAC access is a human right. AAC devices may be accessed via finger point, switch, eye-gaze, or through other access points. It is vital to determine the easiest and most convenient way for the user to access the AAC device so they may have a reliable method of communication across a variety of environments.  Adequate AAC Access means having access to the AAC device at all times (just as a verbal speaker has access to their voice 24/7). We never take away devices for behavior, limit their access to certain periods of the day, or put them on a shelf. For families new to AAC, 24 hour AAC device access must become habitual.

A common question we receive:
“My child is repeatedly hitting buttons on the AAC device. Is he stimming on the device? What should I do?”

Answer:
“This behavior may be equated with the babbling stage in a verbal child. We need to let our AAC users explore their “voices.” The child is learning; they are studying and figuring out where words are located on the device. They are learning the sounds. They are exploring. This is why having unrestricted access is important.”

Resource:
Stimming or Learning? Considerations for Kids who Repeat Themselves with AAC 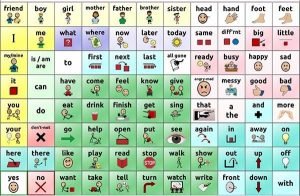 The resource has modeling videos
Presented by Linda J. Burkhart and Aura Baker at Closing the Gap Conference, October 2016

The Handout for this Case Example

The (FREE)  ASF Communication Series “was designed by three communication and AAC experts, including Erin Sheldon, M. Ed.; Maureen Nevers, MS, CCC-SLP, Licensed Speech-Language Pathologist, Augmentative Communication Specialist; Dr. Caroline Musselwhite, CCC-SLP; Mary-Louise Bertram, teacher and PODD AAC specialist. The information is presented in bite-sized chunks to make it as easy as possible for families to start and stick with the training for the long-term so that you and your individual with AS can reach her/his greatest communication success at any age.”

PROJECT CORE FREE PROFESSIONAL DEVELOPMENT
A Stepping-Up Technology Implementation Grant Directed by the Center for Literacy and Disability Studies
“The Project Core implementation model is aimed at helping teachers provide students with significant cognitive disabilities and complex communication needs with access to a flexible Universal Core vocabulary and evidence-based instruction to teach them to use core vocabulary via personal augmentative and alternative communication (AAC) systems. The model is designed for students with significant disabilities who do not yet use speech, signs or symbols to communicate in flexible ways. This includes students who rely on early forms of communication such as facial expressions, vocalizations and body movements, as well as students who are beginning to use symbols, signs, or words but cannot yet put them together. No prior training or experience with AAC is necessary to get started, but a fundamental belief and classroom culture that recognizes that all students can learn to communicate in increasingly complex ways is required.” Professional Development Modules

Hands On? Hands Off! – by Carlton Anne Cook Walker