The Therapist Neurodiversity Collective genuinely believes that all humans have the right to be treated with dignity, empathy, and respect.

Training humans through operant conditioning (rewards and punishments) is dehumanizing. 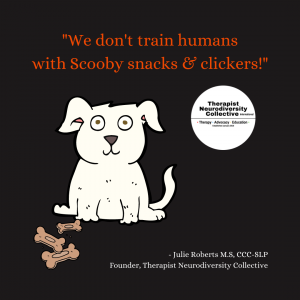 Applied Behavior Analysis(ABA) practices will always be based upon a foundation of compliance, coercion, and behaviorist principles.

It is impossible to practice ABA even gently or playfully, without attempting to control and manipulate a person’s behavior. The fundamental goal of ABA is compliance with the will of the person in the position of authority; this is completely counter-intuitive to self-advocacy, self-determination, and upholding human rights and dignity.

PBIS is used in public school systems and PBS is used in schools, group homes for disabled people, residential assisted living facilities, residential care homes, and institutions internationally.
Both are forms of ABA. Therapist Neurodiversity Collective believes that the use of ABA on non-consenting humans is a violation of human rights.

What does eliminating PBIS or PBS look like in pediatric or school therapy practices?
If treats, small gifts, special activities, etc. are planned, all students or clients receive them, regardless of the therapist’s perception of the child’s on-task behavior, regardless of attendance, test scores, the number of books read, a number of drills completed, or the amount of work completed.

The child or teen gets the treat because they are a human being and a part of that community.

What does eliminating PBS look like in rehabilitation or skilled nursing settings?
The patient’s rights and their right to refuse are honored and respected. Patients are not rewarded with access or denied access to their personal belongings, activities (such as outings, group events, TV shows, special treats, etc.), food, drink, visitors, attention as a way to control their behavior.

The patient has the same civil liberties and personal rights, and the same access to activities, foods, drinks, treats, and personal belongings that they had prior to becoming a patient. They are treated with dignity because they are a human being.

(Summarized. Click here or on the above link to read the full article.) 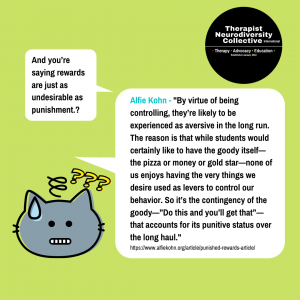 It is primarily Alfie Kohn’s work that shapes the Therapist Neurodiversity Collective’s position on behavior modification through PBS, PBIS, and positive reinforcement, or as he eloquently states, “control by seduction”.

“Our basic strategy for raising children, teaching students, and managing workers can be summed up in six words: Do this and you’ll get that. We dangle goodies (from candy bars to sales commissions) in front of people in the same way that we train the family pet. Since its publication in 1993, this groundbreaking book has persuaded countless parents, teachers, and managers that attempts to manipulate people with incentives may seem to work in the short run, but they ultimately fail and even do lasting harm. Drawing from hundreds of studies, Kohn demonstrates that we actually do inferior work when we are enticed with money, grades, or other incentives—and are apt to lose interest in whatever we were bribed to do. Promising goodies to children for good behavior, meanwhile, can never produce anything more than temporary obedience. Even praise can become a verbal bribe that gets kids hooked on our approval. Rewards and punishments are two sides of the same coin—and the coin doesn’t buy much. What is needed, Kohn explains, is an alternative to both ways of controlling people. Hence, he offers practical strategies for parents, teachers, and managers to replace carrots and sticks. Seasoned with humor and familiar examples, Punished by Rewards presents an argument that is unsettling to hear but impossible to dismiss.”

The Risks of Rewards – Alfie Kohn

Collaborative & Proactive Solutions (CPS) is the model of care Dr. Greene originated and describes in his various books.
“The CPS model is based on the premise that challenging behavior occurs when the demands and expectations being placed on a kid exceed the kid’s capacity to respond adaptively…” “…the goal is to help them solve those problems, rather than trying to modify their behavior through application of rewards and punishments.”

Important note: While Therapist Neurodiversity Collective recommends several aspects of the Lives in the Balance/Collaborative & Proactive Solutions (CPS) approach, we are highly disappointed that Dr. Greene recommends the ableist treatment framework of Social Thinking, a therapy company that actively teaches neurodivergent masking and camouflage.  Social Thinking ® curriculum and materials are not neurodiversity-affirming.

Positive reinforcement is a form of Applied Behavioral Analysis (ABA) that uses motivation through rewards. It is considered the cornerstone of Applied Behavior Analysis (ABA), especially ‘new’ ABA, ‘naturalistic ABA,’ and ‘motivational based play therapy.‘ Positive reinforcement is a form of “Operant Conditioning” which is behavior manipulation through external forces.

Note: The author of this paper is a behaviorist and has served as president of ABAI, SABA, SEAB, and SEABA. As he discusses the harms of using positive reinforcement on human beings in the paper, he then concludes that “The forms of behavioral control we call “posi­tive” and “negative” are inextricably linked. Thus, decisions about “good” and “bad” methods of control must be decided quite apart from the questions of whether the methods meet the tech­nical specification of “positive rein­forcement” or “aversive” control. We need to seek a higher standard, one that emphasizes outcomes more than pro­cedures. Our chief concern should not be whether the contingencies involve the processes of positive reinforce­ment, negative reinforcement, or pun­ishment. Instead, we should emphasize the ability of the contingencies to fos­ter behavior in the long-term interest of the individual.”***
Perone M. Negative effects of positive reinforcement. Behav Anal. 2003;26(1):1-14. doi:10.1007/BF03392064

*** Therapist Neurodiversity Collective’s position is that emphasizing clinical outcomes at the expense of the emotional well-being of the human on the receiving end of the treatment is unethical and ableist. 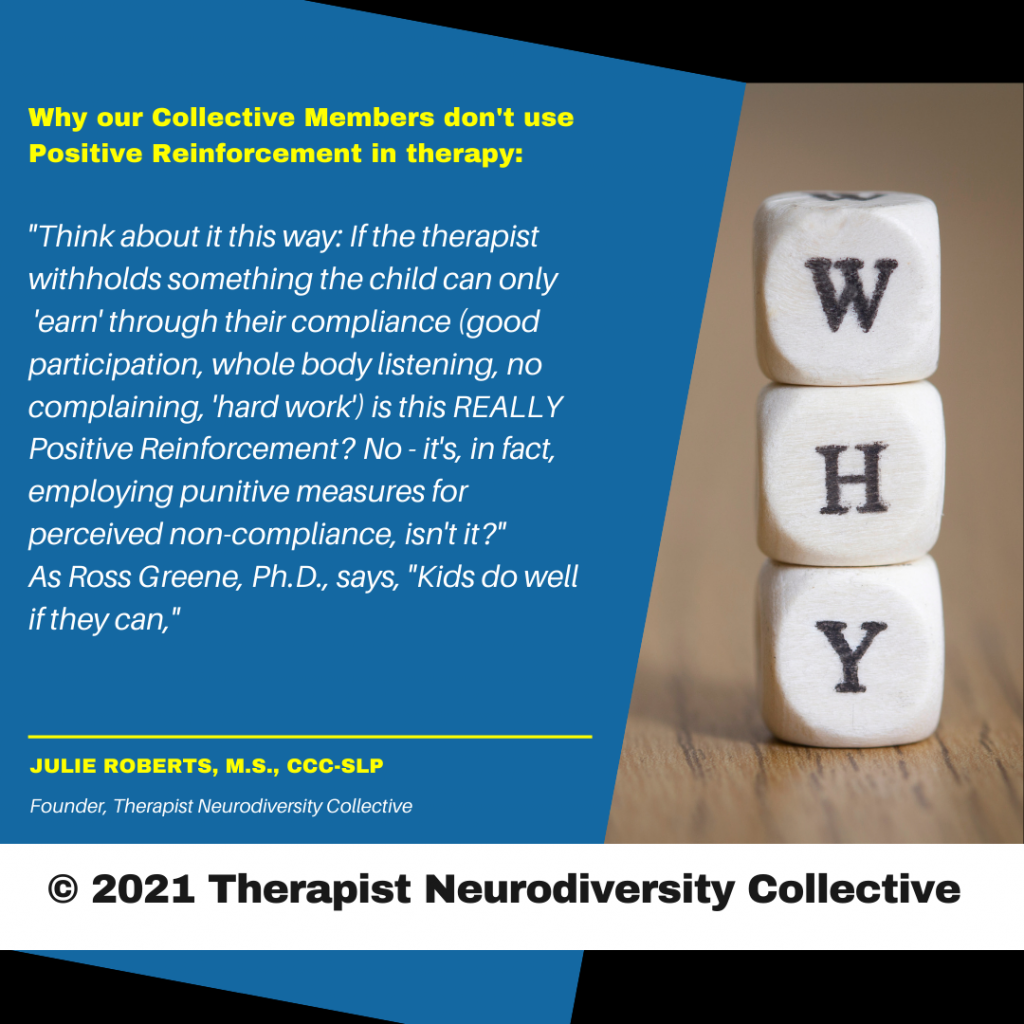