Autistic children “generally receive the greatest amount of social skills intervention during this developmental period, which decreases precipitously after high school. Thus, despite being at an age when intense attention is often paid to social skills training, the children are nonetheless rated poorly by both adults and same-age observers.”
Sasson NJ, Faso DJ, Nugent J, Lovell S, Kennedy DP, Grossman RB. Neurotypical Peers are Less Willing to Interact with Those with Autism based on Thin Slice Judgments. Sci Rep. 2017;7:40700. Published 2017 Feb 1. doi:10.1038/srep40700 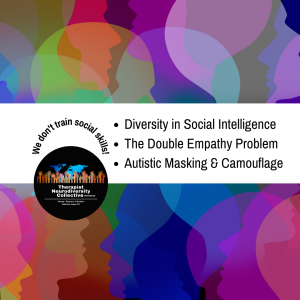 Therapist Neurodiversity Collective understands that communication is a multi-way process and that the onus should not be placed solely on Autistic people to repair communication differences. Autistic (and more broadly neurodivergent) people communicate differently than neurotypical people. And yet we therapists (and the world) often expect them to change their communication styles, make adjustments, and comply with often confusing spoken and unspoken rules of social interaction. We don’t’ train social skills because we know that diversity in social intelligence is natural and viable.

Examples of Neurotypical Social Skills Programs that do not align with the Neurodiversity Movement:

Historically, ‘social skills training/intervention’ has been generally based upon therapists teaching Autistic and other Neurodivergent children and adolescents to mimic neurotypical styles of communication through therapy models including:

When therapists adopt a ‘curative’ approach and train Autistic children and adolescents to mimic neurotypical social skills through masking, fawning and ignoring sensory distress it can cause significant harm and trauma. Autistic masking research indicates that continually camouflaging one’s autism leads to suicidal ideation, decreased self-esteem, PTSD, depression, constant anxiety, and self-doubt because the person is taught to intently scrutinize and judge all of their social exchanges and communication, and interactions. Social skills training removes autonomy. Even when social skills intervention appears successful, what does that mean? Successful for who, to what end? By what measure do we define success?

Social skills training can lead to a lifetime of Autistic people experiencing high anxiety about social skills expectations, creating self-doubt, and even self-loathing. Therapists run the risk of potentially harming their clients or students through the teaching of camouflaging (training an Autistic young person to feign interest in someone’s conversation while cognitively laboring to come up with the right response or reaction in the interaction).  Constant self-monitoring of one’s personal interactions is exhausting, draining, and leads to autistic burnout.  No matter how hard an Autistic person tries to adopt predominant neurotypical conversation skills, it is unlikely to ever feel enjoyable or natural. The person may ruminate for hours after, worried if during that last social exchange they got it right or not. It’s an unnecessary burden to carry through life and creates internalized ableism and anti-autistic bias.

Therapist Neurodiversity Collective understands that communication is a multi-way process and that the onus should not be placed solely on Autistic people to repair communication differences. Autistic (and more broadly neurodivergent) people communicate differently than neurotypical people. And yet we therapists (and the world) often expect them to change their communication styles, make adjustments, and comply with often confusing spoken and unspoken rules of social interaction.

We don’t’ train social skills because we know that diversity in social intelligence is natural and viable.

A Conceptual Analysis of Autistic Masking: Understanding the Narrative of Stigma and the Illusion of Choice

Research into autistic masking has recently started to gain traction, showing that masking is related to late/missed diagnosis, and a selection of negative outcomes including burnout and suicidality in autistic people. Though masking is described as a social strategy, the application of social theory to understanding masking is sparse. In this analysis we review literature so far in light of the historical deficit focused narrative of autism and make suggestions for how we can use social psychological theory to better understand what masking is. We discuss the role of stigma on identity expression, and how social theory can be applied to understanding which aspects of contextual identity shifts are harmful to autistic people. We also discuss issues around a gendered narrative of masking, including the exclusion of non-binary autistic people, and those whose autistic characteristics do not fit within a binary narrative.

Finally, we make suggestions for future research, including the use of a multidimensional conceptualisation of masking that takes into account the role of internal and external aspects of masking, in interaction with the role of time as a developmental factor.
Pearson, A., Dr, & Rose, K. (2020, July 15). A Conceptual Analysis of Autistic Masking: Understanding the Narrative of Stigma and the Illusion of Choice. https://doi.org/10.31219/osf.io/6rwa5

Study Challenges Assumptions About Social Interaction Difficulties in Autism
“Most studies attempting to understand social disability in autism focus exclusively on individual characteristics. This presumes that any difficulties in social interaction are driven solely by the autistic person. But how each person influences and is influenced by the other is key to understanding affiliation and social quality. The study focused on the so-called “double-empathy problem,” which predicts that two people who are neurologically different and have distinct modes of communication and understanding may have trouble connecting with each other, as commonly occurs in interactions between autistic and non-autistic adults.”

Being versus appearing socially uninterested: Challenging assumptions about social motivation in autism
“We believe that some influential accounts of autism rest on a questionable assumption that many of its behavioral characteristics indicate a lack of social interest – an assumption that is flatly contradicted by the testimony of many autistic people themselves. In this article, we challenge this assumption by describing alternative explanations for four such behaviors: (a) low levels of eye contact, (b) infrequent pointing,
(c) motor stereotypies, and (d) echolalia. The assumption that autistic people’s unusual behaviors indicate diminished social motivation has had profound and often negative effects on the
ways they are studied and treated. We argue that understanding and supporting autistic individuals will require interrogating this assumption, taking autistic testimony seriously, considering alternative explanations for unusual behaviors, and investigating unconventional – even idiosyncratic – ways in which autistic individuals may express their social interest. These steps are crucial, we believe, for creating a more accurate, humane, and useful science of autism.”
Mitchell, Peter; Cassidy, Sarah; Sheppard, Elizabeth.Behavioral and Brain Sciences; New York Vol. 42, (2019). DOI:10.1017/S0140525X18002212

It is a myth that Autistic people lack a Theory of Mind (TOM).

The closing of the theory of mind: A critique of perspective-taking
“Theory of mind (ToM) is defined as the ability to attribute mental states to oneself and others and is often said to be one of the cornerstones of efficient social interaction. In recent years, a number of authors have suggested that one particular ToM process occurs spontaneously in that it is rapid and outside of conscious control. This work has argued that humans efficiently compute the visual perspective of other individuals. In this article, we present a critique of this notion both on empirical and theoretical grounds. We argue that the experiments and paradigms that purportedly demonstrate spontaneous perspective-taking have not as
yet convincingly demonstrated the existence of such a phenomenon. We also suggest that it is not possible to represent the percept of another person, spontaneous or otherwise. Indeed, the perspective-taking field has suggested that humans can represent the visual experience of others. That is, going beyond assuming that we can represent another’s viewpoint in anything other than symbolic form
Cole, G.G., Millett, A.C. The closing of the theory of mind: A critique of perspective-taking. Psychon Bull Rev 26, 1787–1802 (2019). https://doi.org/10.3758/s13423-019-01657-y

So an SLP was late-diagnosed as Autistic this week…
Nothing about Social Skills Training is Neurodivergence-Affirming – Absolutely nothing.
“Training” Social Skills is Dehumanizing (Part 1)
Why Perspective-Taking and Neurodiversity Acceptance? (Part 2 of “Training” Social Skills is Dehumanizing: The One with the Therapy Goals)
On Writing Masking Goals for Autistic Middle School Girls – Stop It!
An Autistic SLP’s Experiences with Social Communication
A Letter from an SLP to a Parent, Immediately After an Autism Diagnosis for a 5-Year-Old