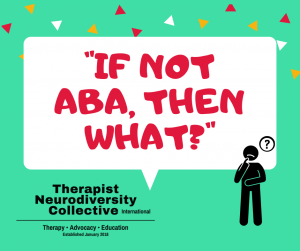 If a person has no way to functionally communicate at the moment, or at all, their behavior is communication.

Dehumanizing human behavior is inhumane. There are more empathetic ways to address human behavior than behavior manipulation or extinguishment. Who does that help? Is the neurodivergent person demonstrating the behavior, or does it just make life easier for the people around them?

Consider the following:
Does the neurodivergent person have an effective and robust method of communication, including alternatives to spoken language, even if the person demonstrates the ability to produce spoken language? Did you consider any medical issues they may be experiencing? Did you address and meet the neurodivergent person’s sensory needs and/or their sensory overwhelm? Did you ignore their protest or fail to get consent for physical contact? Did you address any issues, needed changes, or problems with their immediate environment? Did you consider Family/Support staff behaviors and responses?

There are better ways to address human behavior than behavior plans, compliance-based goals, and rewards and punishments.

“A checklist for identifying sources of aggression” – We are Like your Child, May 11, 2014

“For Whose Benefit?: Evidence, Ethics, and Effectiveness of Autism Interventions” – White Paper – Autistic Self Advocacy Network

“Autism and The Myths around Violence” – Ann’s Autism Blog, September 2021

“The problem with behaviorism” – Alliance Against Seclusion and Restraint, Beth Tolly

(The following Links are to United States’ Amazon website. Therapist Neurodiversity Collective has no financial affiliation with the authors or Amazon)

Book: Ten Rules for Ensuring People with Learning Disabilities and Those Who Are On The Autism Spectrum Develop ‘Challenging Behaviour’: … and maybe what to do about it

Pamphlet: Ten Rules for Ensuring Miscommunication When Working With Autistic People and People with Learning Disabilities: … and maybe what to do about it – September 1, 2018

“Self-injurious behavior is a cry for help.” “ABA therapists use an FBA to look at both the antecedent and the consequence of SIBs (self-injurious behaviors) in order to hypothesize the function of SIBs. It is unclear why one would assume such an assessment/analysis would also be appropriate to assess the thoughts, feelings, and other internal processes that often determine the function of self-injurious behaviors (especially since we know this is the case for SIBs in the non-autistic population). Instead of approaching these SIBs and understanding them the way we understand SIBs in other populations, we have misapplied an FBA in an attempt to measure SIBs despite the fact that it cannot measure such a construct. This makes the assessment unscientific and methodologically flawed.”

“Serious issues with the application of ABA to autistic students, specifically “lower functioning” and nonverbal ones, are discussed, especially with regard to lack of current and longitudinal scientific testing and research with respect to these individuals. These effects and the trauma that occurs resultantly are categorized as abuse. Finally, drivers of the expanded usage of ABA within the autistic community despite a lack of efficacy are also discussed, such as a potential current market size as large as $17 billion annually and the deficiency of variety in techniques used by the psychologists and behavior technicians who utilize ABA…”